Carolus Battus (ca 1540-1619) has had a turbulent life. He was born in Ghent in Flanders (Belgium), studied medicine in Rostock (Germany) and worked as a physician in France and Germany before settling down, first in Antwerp in Flanders and later in Dordrecht in Holland. His last residence was Amsterdam.

Battus was not just a physician. He also wrote and translated several works on medicine and literary works. The Excellent Cookbook is one of his original works. It was added to the second edition of the Medecynboec, his translation of a German book on medicine, the Artzneybuch from the german physician and apothecary Christoph Wirsung.

The life and works of Battus are the subject of the first three chapters of the introduction to the edition of The Excellent Cookbook. 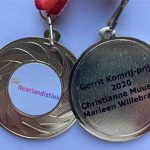 The Excellent Cookbook has won an award! On 17 December the winner of the Gerrit Komrij-award 2020 consisted on the team of  Het excellente kookboek van doctor Carolus Battus uit 1593.

This award is for people and organisations that have contributed to the popularisation of historical Dutch litterature. Read more about it on the Dutch website of Neerlandistiek, the online magazine for linguistic and literary research.

Questions or remarks?
Send us an email!